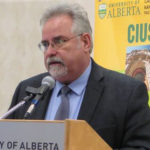 ANDRIJ MAKUCH is a research coordinator of CIUS’s Peter and Doris Kule Ukrainian Canadian Studies Centre, as well as associate director of research for the Holodomor Research and Education Consortium at CIUS. He has taught “The Ukrainian Experience in Canada” at the University of Saskatchewan and conducted research for the Ukrainian Cultural Heritage Village near Edmonton. He is the co-compiler of Ukrainian Canadian Content in the Newspaper Svoboda, 1893–1904, compiler of Encyclopedia of Ukraine: Index and Errata (2001), co-editor of Contextualizing the Holodomor: The Impact of Thirty Years of Ukrainian Famine Studies (2015), and guest editor of Ukrainians in Canada between the Great War and the Cold War, a special issue of the Journal of Ukrainian Studies (Winter 2003).

The sociological studies of an earlier era [of research on] Ukrainian Canadians were written predominantly from an Anglo-Canadian perspective, centring on the question of immigrant adjustment. Some examples are [J.S.] Woods­worth’s “Ukrainian Rural Communities” (1917) or Charles Young’s Ukrainian Canadians: A Study of Assimilation (1931). A crossover work was Vera Lysenko’s Men in Sheepskin Coats (1947), written by a Ukrainian Canadian who was not concerned about assimilation per se, as compared to integration, but rather about the manner in which it was conducted and achieved.

After the Second World War, sociological studies were more likely to examine Ukrainian Canadians in their own right. I will use, for example, the volume edited by Roman Petryshyn, Changing Realities: Social Trends among Ukrainian-Canadians, which came out in 1980, as well as the recent work by [Wsevolod] Isajiw et al. on the fourth wave [of immigration to Canada], which was never published in full.

The earliest historical studies of Ukrainian Canadians tended to be recollections of the pioneering period, for example, Vasyl Chumer’s Spomyny. Subsequently they started looking more closely at the development of Ukrainian Canadians both geographically and organizationally. The majority of these works were in Ukrainian, often descriptive, and prone to a certain amount of filiopietism and attempts at group legitimization. All the same, they established the contours of Ukrainian life in Canada.

I just want to add that as they wrote their memoirs, Ukrainian Canadians had […] a strong sense of their critical role in the settling of the Canadian Prairie Provinces, and with it a sense of accomplishment, that they had achieved something special. This is something you will not find among Ukrainian communities in the United States in the same way. So, in comparison, they had a perception of territoriality, if you want to call it that [over broad expanses of land].

The 1970s saw the evolution of the field to include works by trained professionals utilizing primary sources and/or field research. One can point to authors such as John Lehr, Frances Swyripa, and Orest Martynowych, among others, in this regard. CIUS played a vital role in helping to move this process forward, with conferences [on Ukrainian-Canadian themes], research funding, scholarships, publishing, and making resource materials available, notably a large project to microfilm Ukrainian-Canadian newspapers and serial titles published before 1970. This was undertaken very early in the history of the Institute. I will not deal here with ethnography or other disciplines.

One of the questions posed to us was: “Should the emphasis be on organized Ukrainian community life in Canada or more broadly on Canadians of Ukrainian descent regardless of their organizational or community involvement?” [In other words,] the question is whether to study an organized, elite-led Ukrainian community or general social history. I strongly believe that an initial or immediate emphasis on historical writing about Ukrainians in Canada after the pioneer period needs a strong focus on organized, institutional Ukrainian life, as well as a full picture of socio-economic circumstances, in order to establish the framework in which a broader cultural community functioned. We now have this, certainly, for the period up to the Second World War, thanks to the volumes prepared for the Institute by Orest Martynowych: for the earlier period, we have Ukrainians in Canada: The Formative Period, which you received with your packages, and the recently released follow-up volume, which goes up to the Second World War. Basically, we have a general framework [for additional research] in Ukrainian-Canadian studies.

Before getting to this matter, we need to recognize that pioneer studies have been undertaken extensively, although not exhaustively. The Martynowych volume that I mentioned, which covers the period from 1891 to 1924, required extensive primary research, notwithstanding the fact that a lot of work had already been done on the Ukrainian pioneer period. Still, it had one notable gap—the immigration of Ukrainians from Russian-ruled Ukraine. This was filled by a subsequent monograph by Vadim Kukushkin, From Peasants to Labourers. The history of the interwar period and the Second World War could still use research, and even the pioneer period is certainly not exhausted.

Meanwhile, a fair amount has been written about Ukrainian life since the Second World War, mainly as articles, although a fuller historical account is much needed. For practical considerations, a periodization might go from about 1945–46 until about 1967 to 1971—that is, the postwar period up to the period in which multiculturalism was proclaimed—and then the subsequent period, 1971 to 1991, and finally post-1991. Since it is now twenty-five years [since the centenary of Ukrainian settlement in Canada and the proclamation of Ukrainian independence], we can certainly view this from a certain historical perspective, but I think the earlier periods would need to be covered first. The immediate post–Second World War period certainly stands out as requiring study. In the short term, actually, I do not think we have exhausted the study of Ukrainians during the First World War, particularly in view of the fact that the Ukrainian community was really under attack by nativist Canadians at that time. The question of internment is one matter, but it is part of a larger picture.

The relationship between Ukrainian settlers and their descendants and the First Nations is also a topic that requires further study. Some recent academic works have appeared in this regard, including a research report by Robert Klymasz for the [2010 issue of] Winnipeg Papers, put out by the Centre for Ukrainian Canadian Studies,[1] cheekily named “Cossacks and Indians: Encounters, Abductions, Guilt-Ballads, and Empathy,” as well as some articles by Lindy Ledohowski. A proper social history of the interwar period, both urban and rural, would be much desired.

The relationship between Ukrainian and Ukrainian-Canadian studies—what do they have in common? […] It is not an overly complicated matter. Ukrainian-Canadian studies, by definition, do have to take into recognition the role played by Old Country attitudes and experience in the development of Ukrainian life in Canada. You can use the term “cultural baggage” or you can refer to Louis Hartz’s Founding of New Societies (1964). People come to a country with certain preconceptions or a cultural history, and then they interact with circumstances in the New World. Also, it is important to look at the ongoing interplay between the Old Country and the New World, as immigrants [or their descendants can sometimes be] influenced by events in their ancestral homeland.

I will use a prime example. Ukrainian community development in the early years in Alberta was spurred by a gathering in 1909—a narodne viche (popular assembly) that very much had as its point of departure the Prosvitno-ekonomichnyi kongres[2] held earlier that year in Lviv. So one cannot really divorce Ukrainian-Canadian studies from Ukrainian studies. If you are dealing with Ukrainian-Canadian studies, you really do have to know about developments in Ukraine, because there is an interplay between them.

Let me move on to some specific items that I think [should be undertaken to further Ukrainian-Canadian studies]. Certainly I think we will require a major conference dealing with the immediate post–Second World War period [in Canada], about 1945–55. This could be either a major public conference or a closed-door [dedicated think-tank with papers distributed in advance].

Next, we are in dire need of a study on the fourth wave of Ukrainian immigration to Canada, and then there is always the question of the 1980s immigration from Poland and the former Yugoslavia, which still remains generally unstudied. And in fact, that period of immigration is not even established as a period, because there is the third wave, [but is this] the late third wave. Is it a pre-fourth wave or is it a fourth wave, and is what we call the fourth wave actually a fifth wave? That is an issue that will have to be resolved in the future.

I think there is a need for a statistical study of Ukrainian Canadians today—basically a snapshot of the current status of the Ukrainian community in Canada. The Statistical Compendium on the Ukrainians in Canada, 1891–1976 was a landmark work. It was updated in certain categories by Bohdan Kordan’s Ukrainian Canadians and the Canadian Census, 1891–1996, but time has moved on, and I think we would benefit from a major study of just what the statistics [tell us about the present state of] Ukrainian Canadians. And I think there is a need for more interdisciplinary and micro-local histories. John Lehr’s work of 2011 on the Stuartburn[3] colony, Community and Frontier, is a good example. By the same token, I think there is ample room for urban histories—to look closely at major centres of Ukrainian settlement, such as Edmonton, Saskatoon, Winnipeg, Montreal, and Toronto.

Our next presenter was actually supposed to be a discussant. We asked him to step up as a presenter because the person who was supposed to be here, Matthias Kaltenbrunner from the University of Vienna, was not able to make it. That is unfortunate, because he would have brought an international perspective, but I thank Roman for stepping up.