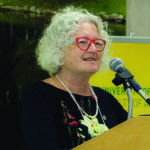 Member of Parliament for Edmonton-Strathcona

Good morning, dobryi den’. In the eight years that I have been the Member of Parliament for this area, I have spent much time with my wonderful Ukrainian-Canadian friends. I am looking forward to maybe being an honorary Ukrainian Canadian, because I love the community so much.

Your Excellency Ambassador Shevchenko, it is always nice to have you here in Canada, and we know that we hold him dear because of the time that he spent here in Edmonton with the terrific newspaper that comes out of here.[1] Mr. Ambassador and Mr. Kravchenko, thank you so much, Associate Vice-President Hamilton, Dean Cormack, Bishop Borys, and all the Ukrainian scholars.

When I went over what the Institute has done for 40 years, it is profound. That takes more than dedication; it takes a real dedication to the heart. You know, not only have you built an incredible institution here at my alma mater, the University of Alberta, you have inspired the development of scholarship in Ukrainian studies across Canada and around the world, and equally important, the relationship between Canada and Ukraine.

Having had the privilege now of visiting Ukraine four times, and in particular the time that I spent with Ukrainian interns,[2] I think some of the most important learning experience that we can offer in Canada to Ukraine is the hands-on experience of Ukrainian youth, or post-doctoral Ukrainian students, coming to Canada, spending time in our legislature and parliament, and spending time with you here, furthering research, sharing ideas, and then taking those back.

I know with absolute certainty of the young Ukrainians who have come to Parliament Hill to participate in our program, that they have gone back fully charged with determination to build the rule of law and democratic reform and are digging into research. I know that one young fellow I met in a human rights organization is struggling to preserve the archives of the Holodomor. So, nothing could be more important than this Institute, and that all levels of government and the university continue to support it.

Scholarship is important, but I think that we also need to be making sure that in all fields of study, in film, in literature, more people of Ukrainian descent are encouraged to write and produce in those areas so that others can know the richness of the history of the Ukrainian people. I have met with some of the young Ukrainians who have been doing films at the front, and it is heartbreaking, but it is so powerful to bring my colleagues to those viewings, to see first-hand what is going on, to cut through the propaganda.

I know that on Parliament Hill, we continue to be there for the Ukrainians as they fight to retain Ukraine. There have been so many changes in the eight years since I was elected, witnessing the tragedy that is going on there. But Canada needs to stand firm, and I know that you can count on the House of Commons to be there, including supporting scholarship