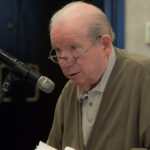 MANOLY R. LUPUL graduated with a BA and a BEd from the University of Alberta (U of A), an MA from the University of Minnesota, and a PhD from Harvard University, specializing in the history, philosophy, and sociology of education with a minor in political studies. Dr. Lupul published two books, including his memoir The Politics of Multiculturalism, edited five other books, and contributed numerous chapters and articles in books and scholarly journals. At the U of A he was the founding director (1976–86) of the Canadian Institute of Ukrainian Studies; to assist CIUS he co-established the Canadian Foundation for Ukrainian Studies in 1975. Lupul was an executive member of the Canadian Consultative Council on Multiculturalism (1973–79), and as a delegate of the Ukrainian Canadian Committee he wrote and presented a brief to the Joint Parliamentary Committee on the Canadian Constitution (1980). He also played a large role in the establishment of the Ukrainian bilingual education programs in Edmonton’s two school systems. For his scholarly and community work, Professor Lupul was awarded the Order of Canada in 2003.

I have entitled this talk “About the foundations of the Canadian Institute of Ukrainian Studies” because it is not the whole story by any means.

In April 1970, the Royal Commission on Bilingualism and Biculturalism recommended “university studies in the humanities and the social sciences related to languages other than English and French.” The other fifteen recommendations, many again in education, practically begged for implementation once a federal policy of multiculturalism was enacted. The Commission was the federal government’s response to Quebec’s Quiet Revolution, which had insisted that the Québécois were not a people like the others, faced as they were with the steady erosion of their language and culture. This really aroused the organized Ukrainian-Canadian community, which declared that we too are not a people like the others, being rapidly assimilated in Canada and deliberately Russified in the hermetically sealed Soviet Union.

In the spring of 1970, the Ukrainian Canadian Students’ Union, SUSK, obtained a federal grant for several field workers to press the ethnic communities to agitate for a federal policy of multiculturalism. One of the field workers somehow found me, and I was gently persuaded to participate in a multicultural conference at the University of Alberta in August 1970, followed immediately by another one, a SUSK conference at St. Andrew’s College, University of Manitoba. Under its then-president Bohdan Krawchenko, SUSK was a dynamic organization, politically sophisticated, with media smarts, and quite brazen in tight situations. Most students were second-generation youths from the postwar Ukrainian emigration, some quite interested in Ukrainian studies.

To match their enthusiasm, I contacted the Ukrainian Canadian Professional and Business (P & B) Club[1]—a more effective political pressure group, I thought, to push for a policy of multiculturalism than the largely émigré-led Ukrainian Canadian Committee of that time. The P & B membership was largely Canadian-born, a few were politically active, and a good number were even rich. In Edmonton, almost immediately I became an ex officio member of the club’s executive and attended its and the members’ monthly meetings for the next ten years. In the process, the Ukrainian Canadian Professional and Business Federation was revived, and I even became its president for two years, 1973 to 1975.

In October 1971, the pressure, mainly by Ukrainians, paid off when the federal government introduced its policy of multiculturalism within a bilingual English-French framework, and provincial governments followed suit, especially on the prairies and in Ontario.

It was quickly evident that neither the P & B clubs nor their federation had any specific cultural or ideological identity. In 1973, our federation executive in Edmonton decided to tie the professional and business sector to education. We would build, we said, a national educational ladder out of the Ukrainian kindergartens already underway in Edmonton’s public and separate schools, followed by the anticipated English-Ukrainian bilingual classes at the elementary school level and the Ukrainian classes already in place at the secondary level. The ladder was to be capped by a research and publication institute of Ukrainian studies at the university, the entire ladder hopefully to be fully funded by government.

With Peter Savaryn’s political help, in July 1976 the provincially funded institute came into being. Peter, who was part of our federation executive, had been a member of the university’s board of governors since 1972. He was prominent in the community and in the Progressive Conservative Party then in power, earning “brownie points” and political IOUs that eventually catapulted him into the chancellorship of the University of Alberta’s Senate. His phone calls were returned by those in the corridors of power, and he was a very good man to know.

Far more important for our purposes than any of CIUS’s earlier relationships within the university, or with the Harvard Ukrainian Research Institute, or Soviet Ukraine, was the future of Ukrainian studies in Canada. One could note, however, that despite the initial open hostility of the deans of the Faculty of Arts and of the Faculty of Graduate Studies and Research, the university president, Harry Gunning, and the two chairs of the all-important Academic Development Committee, Henry Kreisel and his successor, Myer Horowitz, all favoured the Federation’s proposal for an institute and ensured its viability when it counted most. In drawing up the proposal, I saw CIUS and the bilingual classes as the first step in institutionalizing multiculturalism, similar to the institutionalized French-English bilingualism then being created by the federal government. As I put it in my memoirs on CIUS’s first decade:

To me, multiculturalism meant broadening the ethnic base of Canada’s mainstream institutions […] and at least in public education; the implication was quite clear. The English-Ukrainian bilingual classes, begun in September 1974, and the Institute were both visible, public manifestations of the Ukrainian fact in Canada. If the other ethnic groups did not wish to accompany the French Canadians into the country’s public institutions, that was their affair. For me, the larger the Ukrainian presence became, the better, for that ensured the kind of professional or quality institutions and results that alone could impress and engage the Canadian-born of Ukrainian ancestry. The latter had to acquire an objective understanding of their circumstances in Canada, in the interest of both an enlightened multiculturalism and an appreciation of Ukraine’s unfortunate fate as a politically submerged nation.

In the new multiculturalism, the song and dance, the colourful costumes, and the ethnic cuisine of the past—the cultural pluralism hitherto favoured by most Canadians—was not enough. What was needed was the lifting of the Ukrainian cultural agenda into the state’s schools and the state’s universities, to mention no other public institutions. Unfortunately, however, once the bilingual classes, the Institute, and other Ukrainian studies centres—the Chair at the University of Toronto, and similar positions elsewhere—came into being, the Ukrainian community appeared to fall asleep. The sheer success seemingly made further activism unnecessary. Yet in the 1990s, and in subsequent years, much quickly changed, with all the new developments but one affecting the Ukrainian community negatively.

The one positive event was of course the collapse of the dreadful Soviet Union and the birth of a free and independent Ukraine. Among the negatives, however, was, first, the rise of the ethnically hostile neo-conservative political movement, most evident in Preston Manning’s Reform Party, whose sustained attacks on state funding of multiculturalism led to the demise of official multicultural policies and programs. Second, immigration from the Third World moved the social and political needle from a concern with ethnic diversity to how best to accommodate the new religious and racial diversity. Third, the Ukrainian Canadian Professional and Business Federation, and such formerly large clubs as that in Edmonton, collapsed. Fourth, the English-Ukrainian bilingual classes in Edmonton’s public schools simply disappeared. Fifth, few of the retired or about-to-retire professors in Ukrainian studies were likely to be replaced. Sixth, university courses were limping or disappearing altogether because of an apparent lack of interest and low enrolments.

Now, what role did the academics in Ukrainian studies play in all this? Well, certainly the situation in Ukraine received a lot of attention, but as already indicated, for the academy the task was double-barrelled. It was not just to convey a better public appreciation of Ukraine’s many difficulties in the enormous task of building a state almost from scratch, it was also to convey an objective understanding of the changing circumstances of Ukrainian group life in Canada. But regarding the latter, the academics were nowhere to be seen. They said nothing publicly about the disastrous impact of the terrible neo-conservative movement on institutionalized multiculturalism, nor did they say anything about the state’s movement away from ethnic studies to the new racial and religious challenges; nor did they comment on the collapse of the P & B Federation, or the important future viability of P & B clubs, or the disappearance of the bilingual classes in Edmonton’s public schools, or the looming crisis in retaining the hard-won academic gains of the past.

I know, of course, that academics generally like to be left alone to pursue their specialties, and Ukrainian academics are no different. But just as Ukrainians had earlier insisted that they were not a people like the others, it is also true that as a group, academics in Ukrainian studies are not practitioners like the others. Theirs is a very special constituency because their specialities are on the margin of mainstream university studies—especially in Arts faculties, which themselves have been almost outcasts for at least a decade now, given the economic and political preoccupation with STEM courses (science, technology, engineering, and mathematics).

At the base of the special constituency for academics in Ukrainian studies is of course the Ukrainian community, and for many years now it has not been cultivated much by the academics, either through membership in its organizations or by giving its problems much attention. There are many very able and intelligent professional and business people of Ukrainian background out there who are simply not being reached. Academics in professional Ukrainian studies have not mixed with them, informed them, or advised them, or occasionally even led them when necessary. And to do that well, it is of course as important to be familiar with their cultural and political history, and that of Canadians generally, as it is to understand the usual nuanced maze of mainstream academic culture on Canadian campuses. So how, really, did we end up with such little apparent interest in Ukrainian studies, and this at a time when there is more endowment money for such studies than ever before? What share of the blame must the academic leadership bear? I would insist that the gap between town and gown is largely responsible for the bitter fruit that has brought this very conference into being, and one is left wondering whether it is now even too late to try to close that gap.