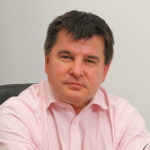 TARAS KUZIO received a BA in economics from the University of Sussex, an MA in Soviet and Eastern European studies from the University of London, and a PhD in political science from the University of Birmingham (UK), and was a post-doctoral fellow at the MacMillan Center for International and Area Studies at Yale University. Kuzio is a research associate at CIUS and a non-resident fellow at the Center for Transatlantic Relations, School of Advanced International Studies, Johns Hopkins University. Kuzio has been a consultant to different branches of the US government, including team leader on a USAID assessment in spring 2015 of democracy, governance, and human rights in Ukraine. His most recent books are Ukraine: Democratization, Corruption and the New Russian Imperialism (2015) and Putin’s War against Ukraine: Revolution, Nationalism, and Crime (2017).

This has to be probably one of the most difficult panels I have ever had to discuss, because of the huge variety and because it is difficult to discuss issues of personal memory and history.

I also thought it was interesting, and I think it is a very valid point that Frank Sysyn brought up, about the other institutions we should not forget. I worked for Prolog from the early 1980s until 1991, when the US government money ran out, and I have written an academic article about Prolog. The US government archives about Prolog until the 1970s have been opened. This was an incredible institution in that because it was not tied to Ukrainian diaspora funding, particularly from the nationalist community, it could publish what the Ukrainian diaspora could not. For example, write and publish books on national communism, books on Jewish-Ukrainian relations, on Polish-Ukrainian relations, and there was a great relationship with the very influential and also US government-funded [Instytut Literacki] Kultura publishing house in Paris. Thus, this is a very important topic to bring out, and an area worth researching for young scholars. The range of publications and books produced by Prolog is really astounding. I just interviewed Anatol Kaminsky in Kyiv; he is over ninety now, he is working at the former KGB archives in Kyiv, and he was one of the founding members of Prolog and then went on to head the Ukrainian Service of Radio Liberty—a fascinating individual.

I thought there was also a common theme in the panel that back then, at both the University of Toronto and the University of Alberta nobody was interested in Ukraine. There was in fact hostility to the idea of creating Ukrainian studies, both here and in Toronto. In Professor Magocsi’s paper there are some interesting nuances that include references to two other people on the panel.

Where of course Professor Magocsi [and the Chair of Ukrainian Studies at U of T] stands out—making him different from other Ukrainian studies institutions—is that he was isolated from the Ukrainian diaspora. There were no other organizations. And why that was the case is a separate question we can discuss, but as he points out, he was isolated from the Ukrainian diaspora until about 2007, and he was also taboo in independent Ukraine for about the first two decades. These things changed in the case of Professor Magocsi, from 2007 to about 2011–12, with the publication of his new books.

If we can think of the impact of the Ukrainian diaspora on Ukraine in the 1990s, then Orest Subtelny had a massive impact, particularly because he was there at the right time in the right place, with the publication of his history of Ukraine[1] in Toronto in 1988, and then the Ukrainian and Russian editions were published in Kyiv in 1991 and 1993. Then it was massively reproduced in hundreds of thousands of copies in Ukraine. I remember going to Donetsk in 1994, to the university, and Orest Subtelny’s history of Ukraine was being used there.

But the next decade was Magocsi’s decade, with the publication of the first edition of his history[2] in 1996. Subsequently the second edition was published, Ukrainian translations, other similar books on Ukrainian history, and the more recent book on the history of the Crimean Tatars.[3] […] In 2009 I helped to organize a panel of scholars—Dominique Arel (University of Ottawa), Alexander Motyl (Rutgers), and Serhii Plokhii and George Grabowicz (Harvard)—at the St. Vladimir Institute in Toronto. There, as an outsider not from Canada, I saw that the isolation of Magocsi from the Ukrainian community was rather ridiculous, and this, I think, broke the ice. Daria Darewych came up to me after the panel and said, “This should have been done long ago!” Magocsi mentions in his paper that in 2010 I introduced him to Borys Wrzesnewskyj, then a Liberal MP; he was one of those opposed to Magocsi being appointed to the Chair [of Ukrainian Studies] in 1980, and of course by then this was long water under the bridge. Thus, as he puts it in his paper, [Magocsi’s] relationship with the Ukrainian diaspora went from alienation to co-operation and everything in between. But I think there is a fascinating bit in this paper about the whole question of his relation to Ukraine and how that opened up new opportunities. At the same time, there was much suspicion about Magocsi for his interest in Transcarpathia and, of course, the Rusyn movement. It was a very strange thing for me to see how somebody who was ostracized by the Ukrainian community for so long at the same time had attracted a very large number of students, who all have extremely fond memories of his teaching. There had always been a strange dichotomy there.

You are right to point out the changes at Harvard, where Magocsi now finally has a competitor in terms of publishing: Serhii Plokhii. I think we will leave to the discussion the question he raised about whether there are too many Ukrainian institutions today.

Talking about the collapse of the Soviet Union is an interesting factor where I would like to make my comments. Professor Magocsi talks about how the disintegration of the Soviet Union and coming about of an independent Ukraine “changed the rules of the game,” finally making Ukrainian studies normalized. Ukrainian scholars in the West could no longer be smug and intellectually superior to scholars in Ukraine. I would agree with that only up to a point, because I think there has been, and Frank Sysyn and others have talked about this, incredible interaction between Ukrainian studies in the West and in Ukraine in various fields, particularly history. If you go to a bookstore, say, in Kyiv, you will see a huge selection of books on Ukrainian history, particularly on the Holodomor, on the 1940s. But that is not the case in political science.

One understands why it was not part of Ukrainian studies prior to 1991, but why have Ukrainian studies still not included political science since 1991? Of course, there is an exception within the University of Ottawa, opened more recently. We have seen tremendous progress in the field of historical writing in Ukraine, but what we have in political science is practically a disaster zone. Serhiy Kudelia wrote a few years ago that there was no political science discipline in Ukraine. There is not a single political science journal in Ukraine. There were two or three in the 1990s, but today there are none. In fact, of the five weekly political magazines, three are in Russian and two are in Ukrainian. Political science scholars in Ukraine are pretty mediocre, and very few of them get published in the West, unlike historians. There is, I would say, a high level of provincialism, they are inward-looking, and they have very little contact with the Western world. There is a project for us, if we want, to assist with political science in Ukraine—the same as we did with history in Ukraine in the 1990s. Although we have our own problems here: East/West: Journal of Ukrainian Studies,[4] for example, has not covered the Crimea or the Donbas, the Ukrainian-Russian war, or the Euromaidan Revolution. I cannot talk about the Harvard journal because the last issue was in 2014. This is important, because one of the functions [of Ukrainian studies] I remember from that era of the 1970s and 1980s was to create these institutions and combat Russophilia in the West. I remember a leaflet from the Harvard Ukrainian Institute saying, “It is not Russia; it is the Soviet Union. You should not mix the two entities up.” Today we have a massive onslaught of Russian propaganda, literally massive, in Vladimir Putin’s information warfare. In the last three years, on the Ukraine-Russia crisis, on the war, on the Euromaidan, over three hundred academic articles and think-tank papers, the largest number ever [since 1991], have been published. […] But the problem is that most of them are written by Russianists, Putinophiles, and others, not really by Ukrainianists; Ukrainian studies are not part of the academic debate on the Ukrainian-Russian war. If you are not part of the debate, you cannot really influence it. An area that is particularly lacking is, of course, the use of social media, which is an important part of Putin’s information war. Historians, unlike political scientists, do not really use social media. […]

Combating provincialism, at a time when you want to escape Russia’s influence and you want to join Europe, is very, very important. If you want to assist Ukraine today, then assist it in the field of political science, as you helped it in the intellectual development of history writing in Ukraine in the two decades after 1991. But on [Professor Magocsi’s idea for] an international centre, I think it obviously is a great idea, but such a centre will probably never be established in Canada. The reason for that is, for example, if you were to find a Ukrainian oligarch or Ukrainian oligarchs to fund that, they are interested only in Washington, Brussels, and London, not in Canada. […] Of the five different [institutes] we can debate separately, but certainly there is a need to work in a broader field than that originally envisaged for Ukrainian studies, including combating Russophilia. These are areas that I think Ukrainian studies can and should move into. I will leave it at that.

[4]    Established by CIUS in 2014 as an online journal succeeding the Journal of Ukrainian Studies (www.ewjus.com).