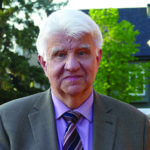 ZENON E. KOHUT is a professor emeritus of history at the University of Alberta and a former director of the Canadian Institute of Ukrainian Studies (1994–2012). He specializes in the history of Ukraine, Ukrainian-Russian relations, and questions of early-modern political culture and identity. Dr. Kohut is the author of Russian Centralism and Ukrainian Autonomy: Imperial Absorption of the Hetmanate (1988; Ukrainian translation 1996), Korinnia identychnosty: Studiï z rann’omodernoï ta modernoï istoriï Ukraïny (2004), and Making Ukraine: Studies on Political Culture, Historical Narrative, and Identity (2011), and co-author of the Historical Dictionary of Ukraine (2005, 2013).

I am also going to follow the instructions I received and talk entirely about the past, and particularly about the interplay between the diaspora institutions’ life and the development of Ukrainian studies. I am going to use my own career as an example of how these things evolved. There is an interplay, and it should illustrate many of the points brought out—again, both the problems of doing Ukrainian studies, as well as to what extent the community was an asset in developing these studies.

Like many of my colleagues, I grew up in two parallel universes: the Ukrainian and American, which became linked and intertwined. I grew up in Philadelphia, in a Ukrainian family. My parents were not part of some intelligentsia; my father was a cabinetmaker, and my mother was a seamstress and homemaker. No one in my family had any university education. I participated in the usual community activities in Philadelphia, and that included Ukrainian Saturday school, Plast,[1] endless concerts, commemorations, akademiï, and so on.

At the same time, I went to American schools, I had American friends, I attended American sports events, concerts, and so on. So you really live in two parallel universes all the time. I went to college locally, La Salle College, now La Salle University. It was a feeder school for the Catholic school system in Philadelphia, but, like many of these small Catholic colleges, it provided a surprisingly good basic liberal arts education. La Salle had a second plus. Like many of the small colleges, it absorbed some of the many European academics displaced after World War II who could not get employment in the major universities. At La Salle they had John Lukacs, a Hungarian who was writing a book a year and became quite famous, actually; and, more importantly for me, Ivan Lysiak Rudnytsky, who of course subsequently taught here, at U of A. By the time I graduated from La Salle, there was an additional large contingent of Ukrainian professors: Leonid Rudnytzky in literature, Miroslav Labunka in history, Eugene Lashchyk in philosophy, and George Perfecky in language.

While these instructors introduced me to new topics and ideas in Ukrainian studies, it was Ivan Lysiak Rudnytsky who introduced me to works in Ukrainian history. I had no [Ukrainian] courses with him at La Salle because no course ever dealt with Ukraine there, but I took courses in European history [with Ivan Lysiak Rudnytsky], with Lukacs and others. However, Ivan Lysiak Rudnytsky invited me into his home, where for the first time I saw a huge library dedicated to Ukrainian history. He made me his teaching assistant, which was quite unusual in an undergraduate situation, but which really meant that I was grading his other students so he did not have to grade, and I would correct the student exams.

Ivan Rudnytsky also introduced me into a Ukrainian intellectual world in Philadelphia. It hovered around Rudnytsky and Ivan Koropeckyj, an economist at Temple University, and recruited several, I would say, generations of students pursuing graduate studies or trying to become literary figures; among these I would include Wsevolod Isajiw in Toronto, Martha Bohachevsky-Chomiak, Orest Subtelny, Marco Carynnyk, and Sonia Sluzar, who later edited Problems of Communism. This Philadelphia core was supplemented with a New York contingent, headed by Vsevolod Holubnychy, the well-known economist, and his wife, and also included Martha Bohachevsky-Chomiak, who was doing her work at Columbia University, and her husband, Rostyslav. They now became sort of New Yorkers, and the link between them was Professor Koropeckyj and his wife, who lived in New Jersey and arranged these parties, soirees, whenever there was some interesting visitor, scholar, some poet, or someone in town, and the guests from New York and Philly would meet halfway in New Jersey in the Koropeckyj household.

Now the parallel Ukrainian sort of academic universe in Philadelphia also extended to more formal institutions. In 1963, when I was just starting at La Salle, the Lypynsky East European Research Institute was founded. It was the academic arm of the Ukrainian Hetmanite movement (Pavlo Skoropadsky was briefly hetman of the Ukrainian State in 1918, and supporters of the Hetmanat thought that monarchism was the real future of Ukraine). The Institute boasted of having the archive of Hetman Skoropadsky. It also had the papers of its patron, Viacheslav Lypynsky, another very important figure as both a historian and a sociologist but also an ideologist of the Hetmanite movement. Well, Ivan Rudnytsky got me involved in that because he was a monarchist, a Hetmanite. I helped to issue English-language leaflets for that, and through the Lypynsky Institute I also met Professor Jaroslaw Pelenski and Maksym Pyziur, a historian and a political scientist, who would take their summers off and work at the Institute, while teaching at their university during the academic year.

While engaged in the parallel Ukrainian community and academic life, I participated in normal American academic pursuits. After obtaining a Woodrow Wilson Scholarship, I was actually recruited by a number of universities for graduate studies, and for a variety of reasons I chose the University of Pennsylvania, which was also in Philadelphia. At that time, Pennsylvania had two specialists in Russian history, that is, Alexander Riasanovsky for the early period and Alfred J. Rieber for modern Russia. Before I left Penn, we already had Moshe Lewin, who was added for Soviet history, which was coming in as a field just at that time. Also, they had the rather distinguished Czech historian Otakar Odložilík, who was covering East-Central Europe. My progress was normal in course work, general exams, and then came thesis time. In one of my seminars with Rieber, I produced a large work on the beginning of modern Ukrainian political thought in the nineteenth century, and one of the elements of this was the role of Cossack autonomist literature, such as Istoriia Rusov and other works. Soon I ended up in eighteenth-century studies, with my thesis on the abolition of Ukrainian autonomy. Somehow Rieber looked favourably on such a topic; maybe he was afraid that with a more modern topic my nationalism would come out. Nevertheless, I was moving on that, but then how could one do this at the University of Pennsylvania, where not a single faculty member knew anything about the topic and the Penn library did not have the resources to support such a research project?

At this time, the Harvard project was just beginning. The chairs were not yet founded, but a program had been initiated by Professor Pritsak. And Professor Rieber allowed me to explore the possibility of engaging Harvard in my research project. At the same time, Professor Pritsak was searching for students, disciples really. You really had to be a disciple of his project, a practitioner of the newly revised Ukrainian studies he was promoting.

With my arrival at Harvard in 1969, I was thrust fully into the Harvard project, from coursework to fundraising. For the first time, I took courses at a university level in Ukrainian history, with Professor Pritsak and, more importantly for me, Professor Oleksander Ohloblyn, who at this time would be the leading authority on Cossack Ukraine anywhere, including Soviet Ukraine. I became first secretary of the seminar in Ukrainian studies held at Harvard University, an editor of its minutes, and then also editor-in-chief of Recenzija, a review of Soviet Ukrainian publications, in 1973–74. Those years at Harvard were absolutely formative for me: at Penn I became a historian, but at Harvard I became a historian of Ukraine.

Thus the Harvard project was very important. First of all, it legitimized my research interest and it gave me the wherewithal to pursue it. During this time I was gradually doing my dissertation work. It was proceeding rather slowly because of all the other things I was doing at Harvard, at the initiative of Professor Pritsak. My university was accommodating, even appointing Professor Ohloblyn as an additional thesis advisor, but everything did not work out so smoothly.

As part of my research I was supposed to go to Ukraine on the IREX[2] program and was accepted for this. Two weeks before my trip I was denied a visa to the Soviet Union. I was hardly shocked by this denial, but it brings out an important point: the ability of the Soviets to shape the field of Russian and Soviet studies in the United States by determining who went and what topics could be studied. It was crucial that you have this first-hand experience to be really a legitimate scholar, at least to get to the first tier of universities. Where could you do this kind of research but over there? Combined with the fact that Russian history was saturated by the students of Michael Karpovich of Harvard—who from the late 1940s to the early 1950s produced a whole array of scholars—these two factors also made any breakthrough for Ukrainian studies very problematic.

I will just mention one other thing that is illustrative. I was writing my thesis, producing chapters, and everything was going smoothly. Then, on my fifth chapter (so I was well into my thesis on the Ukrainian reactions and aspirations of the legislative commission of 1767–68, which was Catherine’s legislative commission, when various elements of society were asked to write petitions about their needs and desires, and so on), this chapter was suddenly rejected by my thesis committee, and the answer was that Alex Riasanovsky had grave reservations about it and its “nationalist approach.” No examples were given; I was simply told to rewrite the entire chapter. It was a very strange chapter to make a stand on, because it was a highly technical chapter and not a broad, interpretive one. I mean, you had these points, from these people, and they all accumulated and so on. So how to rewrite it? Well, I retyped some pages that had corrective white-out on them (this was the pre-computer age) and handed in exactly the same chapter a year later, and the response from Professor Rieber was that the rewritten chapter was like night and day. [Laughter.] It was clear that Alex Riasanovsky, the scion of a White Russian émigré family, just could not accept what was happening and attempted to slow down, if not stop, the process. I do not know whether he even looked at the rewrite. I will stop now, but it shows you both the problems and the great opportunities that came up with the Harvard Ukrainian Research Institute.

We covered a lot of space in terms of the themes, topics, geography, and history of the foundations of Ukrainian studies here at the University of Alberta and in North America in general, and it presents a challenging task for our discussant to comment on all that.

[2]    A US non-profit granting agency, the International Research and Exchanges Board (www.irex.org).