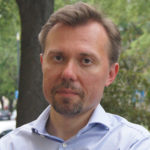 ANDRII PORTNOV graduated from the Universities of Dnipropetrovsk (MA in history) and Warsaw (MA in cultural studies). He is a long-term fellow at the Forum Transregionale Studien Berlin and director of the Berlin-Brandenburg Ukrainian Initiative, as well as guest lecturer at Humboldt University in Berlin (since 2012). In 2006–10 he worked at the journal Ukraїna moderna as humanities editor-in-chief. In 2012 he co-created, and has since co-edited, the Ukrainian intellectual web portal historians.in.ua. He has lectured and conducted research at the universities of Cambridge, Helsinki, and Vilnius, as well as at the Centre for Holocaust and Genocide Studies in Amsterdam and the Centre d’études des mondes russe, caucasien et centre-européen (CERCEC) in Paris. In 2015 he was awarded the Baron Velge Prize and delivered a series of lectures as International Chair for the History of the Second World War at the Free University of Brussels, and in  the spring of 2016 he was a guest professor at SciencesPo Paris.

It is my first time in Canada, so I am very happy to finally be here. But I should probably mention that many years ago, I would say between Dnipropetrovsk, Kyiv, and Lviv, I was one of those wacky young Ukrainian historians who received a CIUS fellowship. The fellowship was for the history of Soviet Ukrainian historiography, and I also remember very well that Yaroslav Hrytsak was the one who recommended me, so it really feels like coming back to the beginning of my academic writing now. I should also tell you that I have a big temptation to speak about the situation in Ukraine, but I will not do that yet, at least not now.

I will focus on the German story instead, because I think it is really interesting, and in some way it is also a challenge. And of course, in speaking briefly about this German situation, I would very much like to continue, or address, Professor Magocsi’s point that there are too many Ukrainian studies centres at the university level in North America. Let us compare these points to the situation in so-called Western Europe, especially in Germany.

I would say that the biggest challenge, in the case of Germany, would definitely be an institutional one, despite our optimism. If you look at the situation of Ukrainian studies—even, broadly speaking, of East European studies—in Germany, you see that until recently it was very difficult to find any professorships in Ukrainian history, literature, politics, etcetera. If you know how the German system works, it is actually crucial to have professors, full professors appointed to some particular field. There are many people doing Russian studies, of course, some are doing Polish studies, and so on. If you apply for a project, for a grant, German or European, there is no way to do it without a professor who would at least formally support you, and that is of course very much a personal problem as well.

The second institutional challenge, related to the first one, is the situation with language teaching. If you look at Berlin, for instance, the capital of Germany, there are people potentially interested in learning Ukrainian—not just students but also journalists, political analysts, and so on. There was no possibility to have a Ukrainian language course at the university level on a regular basis until now—nothing. Interesting.

When I came to Berlin, it was actually kind of a coincidence, because I am not a specialist in Germany (maybe now a little bit). When I came there, it was in 2012, before the Maidan, before all the events that are, as Tim Snyder said, changing the world. I had started giving lectures on Ukraine at Humboldt University, and I should tell you that even before the Maidan you could see that there was a big interest in attending the lectures. I was also amazed that something like sixty people came to my first lecture. I was thinking: why? Because again, there is no Ukrainian at all in the university curriculum, at least in Berlin, and what is also interesting is that I did it and am continuing to do it, not in the history department but at the Institute of Slavic Studies. So quite often, paradoxically (I have no time to explain why), it is easier to get access (at least for me) to Slavic studies than to East European history.

What happened after the events, after the Maidan of this so-called “Ukrainian crisis” and all the well-publicized public debates, were some institutional changes. The most notable, of course, was the creation of a new centre in Berlin called ZOIS,[1] and it is now starting to function. The second story is that of the preservation of the professorship and the re-establishment, if you will, of the professorship in Ukrainian cultural studies in Greifswald, a city in the north (so it was formerly East Germany), north of Berlin. What is interesting is that in both cases, the new centre and this professorship— not a full professorship but a junior one, which means you should wait 5–6 years to make it real; we will see what happens in five years—both of them were financed by the German Foreign Office: not by private foundations, not by Ukraine, but by the German Foreign Office.

Maybe I should also mention another new development—at Viadrina University on the Polish-German border in Frankfurt an der Oder, where we have first of all this new series of summer schools in Ukrainian studies. You have also Ukrainian language courses for the first time, and now they are looking for someone to become a professor of Ukrainian history, but it will also be a half-position, so not a full professorship but fifty percent. You see, you already have a paradox: two professorships, but neither of them is a full one, which is very telling. But still, those three cases—Viadrina, Greifswald, and ZOIS—are long-term projects. The rest could be, in my view, described as short-term, and if you compare the amount of money given to Ukraine-related research in Germany, you will see the absolute dominance of short-term projects. There are millions of Euros given for huge conferences, the most expensive hotels in Berlin, to be held at the end of December, because you should spend the money before the end of the year, and that is it. It is also interesting that it is much easier to get huge financial support for something really short-term than to ask for something even for three years, not to speak of five or ten. So in this sense, of course, the CIUS and HURI experiences are impressive, amazing, and it is hard to believe in something like that in the German situation, especially for people like me, people without a regular position at all.

Coming back to the language issue, last year there was a meeting with the director of Humboldt University. I was there with the Ukrainian ambassador to Germany, Andriy Melnyk, who is a very good diplomat (Ukraine is lucky to have such an ambassador in Berlin, believe me). So we tried to convince the important guys in Berlin that the Ukrainian language should be introduced, and it was very positively accepted. We need financial support for at least the first five years from the Ukrainian state, some foundation, whatever, and as you could imagine, so far all attempts to find such support have failed. This means that there are no regular Ukrainian language courses at Humboldt University, although they are absolutely ready to establish them tomorrow, if you come and do it. After this five-year term, it will be paid by the university itself. So it was a very good offer, but it was not taken.

Now, very briefly, not about institutions but the intellectual landscape. I support what was said by all my colleagues, and also what was written by Mark Von Hagen many years ago in his famous article in the Slavic Review.[2] So, we still have very strong stereotypes—in Germany it is very visible. One of them is, of course, the idea that Russia is a continuation of the Soviet Union, which means that all the stories of the great victory over the Nazis are a Russian story, not a Soviet one. It is a trap, because we see, as Rory mentioned, that Ukrainians would say, “We have nothing to do with the Soviets,” and the response would be, “Okay guys, we have nothing to do with them.” All this positive stereotypical view of the Soviet Union accrues to Russia, and what are we left with? We are left with the idea that “Ukraine” actually means “ethnic nationalism.” That second, very strong stereotype, apparent in public debates, in Helmut Schmidt’s well-known comments and many others, is highly influential in Germany.

The only way to face this challenge is to minimize the (false) logic of talking or writing about Ukraine only, and to expand the field as much as possible. In other words, to show how Ukrainian topics could enrich Jewish, Ottoman, Polish and, last but not least, Russian studies. That is the only way that could, at least prospectively, succeed and contribute something new.

In this respect, we could also mention a point raised by Serhii Plokhii, that Ukraine is a gateway to Europe, a key to understanding what is, or was, going on in different parts of the continent. Ukraine as a state is almost completely missing in the fight for more Ukrainian studies in Germany, and that is very bad. Compared to other post-Communist and post-Socialist countries, it is a challenge. How do you convince those people to be more engaged and motivated? Otherwise, German readiness to pay for it, to participate, is limited and based on their own perceptions and expectations.

To voice a tiny bit of disagreement with Rory Finnin—Rory said that there has been no Ukrainian publication in the Slavic Review. There has been one, and it was a forum (I am talking about [printed format]) you probably know, the Forum on Ukraine, which had an article by Tim Snyder and was followed by a discussant, Andrii Portnov.[3] The first one was initiated in the 1960s by Ivan Lysiak Rudnytsky’s [article] in Slavic Review,[4] and the second one, the most important, by Mark Von Hagen.[39] Forums are important, because they put forward questions [concerning, in our case,] an agenda for Ukrainian studies, including challenges. These challenges are not only to structures, but I believe what is more important are the questions we pose, the agendas we formulate, and the paradigms we form. In this sense, all three forums had a very significant impact indeed, as they suggested new paradigms.

[1]    German acronym for the Centre for East European and International Studies (www.zois-berlin.de).