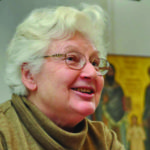 I particularly thank you for inviting me here, because I have always seen myself as a hovering outsider to the various academic establishments dealing with Ukrainian history, since I myself was never trained in Ukrainian history. That being said, I also want to use this opportunity to thank the Canadian Institute of Ukrainian Studies, and particularly its first directors, Professor Lupul and Bohdan Krawchenko, for being brave enough and taking the risk of publishing Feminists Despite Themselves at the end of the 1980s. At that time, in Ukrainian studies this was a dramatic and really risky thing to do. In a sense, between CIUS and the women who organized the “Druhyi Vinok” conferences,[1] Edmonton could consider itself to be the cradle of modern Ukrainian women’s studies, if not the Ukrainian women’s movement. As a movement, the Ukrainian women’s movement does not exist, but as studies, Edmonton really should take the cake. But as our Ukrainian journalists say, “Ia ne pro tse khochu hovoryty”—I want to talk about something else.

I want to go back a little bit to the 1960s and 1970s, and gallop through what was discussed at the last session. Certainly the 1960s and 1970s were a period of experimentation in academic fields, but people in Ukrainian studies did not experiment or take different approaches. Rather, our organizations and our scholars had other functions, as was pointed out. First of all, to legitimate the field of Ukrainian studies, which basically, in the United States and even in Europe, was non-existent. And the other area that they dealt with was to establish the canon on which Ukrainian studies were to be built. In this respect, HURI focused almost in an archaeological fashion on establishing the canon. The [community], on the other hand, was involved with the cannon of the double “n”: it was involved in spreading information on Ukraine. The two sometimes were able to work together but often did not, particularly in the late 1970s and 1980s, which marked a period of tension between society, especially in the United States, and academia.

The other point that was not raised—that complicated the work of both HURI and, to a lesser extent, of CIUS—was the emergence of what I would call the academic-political schools of various organizations: the Ukrainian Historical Society, which had a particular political base, and the Lypynsky Institute. (I cannot believe I am actually saying this, but a person who is largely overlooked is Mr. Stepan Horak and his founding of nationality studies, which was initially funded by the rightmost group of the OUN.[2]) So while HURI dealt with the establishment of the canon, CIUS was in a better position to engage in outreach projects, in slight experimentation, and in really reflecting more realistically what the climate of the times was.

Among the many functions that I have performed in my life was administering and sort of organizing the review of various research projects funded by the American government through the National Endowment for the Humanities; among those were a few volumes of the Hrushevsky translation,[3] and a couple of other publications.

The major problem I had in Ukraine was to break the resistance of people and institutions to taking risks, especially to taking risks when applying for grants, looking at alternative approaches, other sources of funding, or some other things that could be done. There is risk [in engaging in] open debate, risk in potential co-operation, risk in co-operating with a person with whom you may disagree, or even risk in talking to that person.

I am not even discussing the fact that in terms of grants, the first problem was that the people at the top always felt that they had to be first in receiving whatever funds there were. As a result of these failures, which I see in the diaspora also, it is very surprising how few of my American colleagues availed themselves of the possibility of at least trying for grants or co-operation. As a result of all of this, we have not engaged as we should engage in interdisciplinary co-operation, in interdisciplinary projects, and also, in looking at scholarship and history, looking at everything with a little bit of lightness, with a little bit of lightness of approach.

The outstanding issues that I see are really: to accept the reality of Ukraine and to move on. It is not necessary anymore to spread the news about Ukraine, shyryty pravdu pro Ukraïnu; we really do not have to. What we need to do is to make sure that we study and reflect the reality that is Ukraine, the reality that is Ukrainian history. The unconvinced cannot be converted. We have to expand Ukrainian studies into other areas: focus not on Ukraine, focus on where Ukraine can shed light on some other issues. For instance, on the topics of Ukraine and minorities, Ukraine and modernization, etcetera.

My favourite request, of course, will not be honoured—to limit what I call the “sanctification of scholarship.” Scholarship is not the be-all and end-all, and scholarship should not be viewed as the alpha and omega of faith. Faith itself is questioned, even STEM is questioned; we should equally question scholarship. We should also approach various trends a little bit more critically, especially in Ukraine. Just because the French discovered another way of looking at literature does not mean that we have to rewrite the whole study of Ukrainian literature from the postmodernist perspective…

Methodologies that are so favoured in Ukraine are actually beginning to be promoted here. Let’s not lose sight of the fact that the methodology of garbage collection does not collect any garbage, and that really should be a lesson in Ukraine. Another: closed circles in Ukraine—not networking, but closed circles in academia. We have difficulty drawing outsiders into our midst. What we need is real outreach—to develop courses other than courses on Ukraine, but with Ukraine, and co-operate with all players. In short, I see the function of Ukrainian studies as I see the function of area, women’s, or economic studies: develop the field, integrate it, make it redundant, and proceed with scholarship.

I want to remind you that relevant biographical information can be found in the conference program. Our second speaker does not need an introduction, but I just want to say that in a sense, his presence here highlights significant change that has occurred in Ukrainian studies during the last fifteen to twenty years: we have a new, young generation of scholars doing Ukrainian studies who are not necessarily Ukrainians, as the names testify here. Rory Finnin is the director of Ukrainian studies at Cambridge, in Britain, and he came a long way.