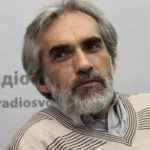 YAROSLAV HRYTSAK is a professor of history at the Ukrainian Catholic University (Lviv) and director of the Institute for Historical Research at the Ivan Franko National University of Lviv. He has taught at Columbia University, Harvard University, and the Central European University. He is the author of numerous publications on modern Ukrainian and East European history, and has won international awards for academic achievement and public service.

Dear ladies and gentlemen, my name is Yaroslav Hrytsak. I am from Lviv, from the Ukrainian Catholic University, and have the special honour and privilege to chair this session, which in a sense will be a continuation of our morning panel, but with a slightly changed focus. We will be focusing on the challenges that scholars in Ukrainian studies are facing now. We have very distinguished scholars here, but before we proceed, let me just give my five-minute introduction as an opportunity to share with you some of my thoughts on that topic.

I do not really remember who said—unfortunately Google fails here…I believe it is in the Bible, but we do not have the bishops here anymore to check with them. [Laughter.] Somebody said, “Vision is what transforms an ethnic group into a nation. Without a vision, a nation is not a nation.” As a student of nineteenth-century intellectual history, I can confirm the veracity of these words, because the vision of Ukraine as we know it now, in the twenty-first century, emerged in the minds of a group—dozens, hundreds, or thousands, but still [a countable number]—in a group of nineteenth-century Ukrainian intellectuals. More often than not they had something to do with Ukrainian studies—but in all possible fields, in many possible ways. Bishop Borys, in his keynote speech today, reminded us that the founders of Ukrainian studies at Harvard and Alberta universities had a very broad vision that was anything but parochial. Actually, the vision was very global, and they put Ukraine in this global context. Professor Sysyn later reinforced this point by saying that people at Harvard and the University of Alberta set standards for scholars in other fields that were not even related, at least directly, to Ukraine. In a sense, all of us sitting in this conference hall are products of this vision, and Ukraine is the first, utmost product, which confirms that this vision has been successful and has had a very long and lasting impact.

Moreover, it was very timely, because a few years after the emergence of the Harvard Ukrainian Research Institute and the Canadian Institute of Ukrainian Studies, independent Ukraine emerged and many findings that had been made in Ukrainian North America were then implemented in independent Ukraine. As a member of the Ukrainian academic community in Ukraine, I can hardly imagine our days, our academic life, how it would look, if not for your works, books, projects, and funds that came from here—from North American institutions of Ukrainian studies, and first and foremost from CIUS. I could hardly think of a better opportunity to extend my gratitude—in my own name, and also in the names of my colleagues in Ukraine, to the CIUS people for their tremendous work, what you have done for us. Thank you so much.

All the more so because this vision proved to be very viable, and probably the best test of this viability was the failure of Putin’s plans with regard to Ukraine in 2014, during the cold Russian Spring. That said, I do not mean to say that this vision [is still viable for the future].

As a recent Nobel Prize winner keeps reminding us, the times are changing. Ukraine grows in strength, but so do the challenges; they are becoming more and more complicated and, I am sorry to say, threatening. If I may formulate this challenge in one sentence, I would quote the words of Ivan Lysiak Rudnytsky. He said on one occasion, but I believe it still sounds true, “Perestan’te buduvaty Ukraïnu—modernizuite ïï!”[1] Ukraine needs not building but rebuilding—or, if you wish, renovating or transforming—that will bring it into the status of a nation with what is called sustainable growth, which will put Ukraine on a par with European countries, North America, Asian countries, and its more successful neighbours to the west, like Poland and Slovakia. This is challenging—nearly impossible but worth doing.

In a way, we have to welcome such challenges. Let me remind you that in Chinese the word challenge is made up of two hieroglyphs: the first is “crisis,” the second is “opportunity.” We have a crisis in Ukraine, thank God! What is missing now is the vision that overcomes this crisis. I do not mean to say that we have to come up with this vision immediately, in this room, today, by the end of the session. But at least we have to give it a try, to the best of our possibilities, as people who are dealing with Ukrainian studies, which I believe is part of our job description.