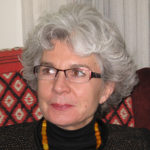 NATALIE KONONENKO is a professor of the Kule Chair in Ukrainian Ethnography at the University of Alberta. She holds a BA from Radcliffe College (Slavic Languages and Literatures) and an MA and PhD from Harvard University (Slavic and Near Eastern Folklore). Kononenko has conducted folklore and ethnographic fieldwork in Canada, Ukraine, Russia, Kazakhstan, and Turkey. She served as editor of Folklorica, the journal of the Slavic and East European Folklore Association, and is the author of Slavic Folklore: A Handbook, the award-winning Ukrainian Minstrels: And the Blind Shall Sing, and other books and articles. Kononenko is an award-winning teacher and researcher, and her interests extend beyond folklore into the realm of digital technologies, an area for which she has received SSHRC (Social Sciences and Humanities Research Council) support.

Thank you, everyone. It was a very interesting panel, lots of good ideas, and I am going to do a little bit of a summary and then head on into a discussion with some observations and desiderata of my own.

It was kind of interesting that we had two schematic talks and two very personal talks. Natalia Khanenko-Friesen talked about defining the field, about comparative analysis. She suggested that we do community outreach, and I should point out that she is the editor of the Engaged Scholar, which means that she does what she preaches and actually works on a publication that works with the community, and also puts the material out. She also stressed working with Ukraine, as did other speakers. I believe Lubomyr Luciuk pointed out that our ties with Ukraine and the things that happen in Ukraine do impact us, and not just us but the entire community.

The other schematic presentation was done by Andrij Makuch. He talked about the history of the field—very nice if you can get his presentation notes, where he has a lot of things listed. Then he talked about desiderata in terms of history and areas to investigate, including the urban environment. Then we had Lubomyr Luciuk and Roman Yereniuk, who gave us much more of a personal experience.

I was really quite pleased to see how important were Lubomyr Luciuk’s personal experiences and the interviews that he did, because I am a professional interviewer and I know that other people in this room have been with us on interview projects. This was really something that made a difference in his life as an academic and as a human being. Roman Yereniuk told us about St. Andrew’s College and the work that it has done—again, a lot of the things that he himself and his group experienced, and how they impacted his research and hopes for the future. From all this I can draw a number of desiderata that fortunately very much coincide with my own. Obviously if you or our panellists do not agree with my desiderata, you can add and correct as we go along.

Andrij Makuch pointed out the importance of doing interviews with the immigration that came after the Second World War. It is an elderly group—if we are going to interview, we must interview them now. I know that Bohdan Kordan has worked on the refugee experience. One of the things that I would like to add, from what I see—and I know the work of a lot of these people, although it may not have come out as much—is that we do actually reach out to others and well beyond the Ukrainian community, and our work does impact other fields. Natalia Khanenko-Friesen (and I believe others also) was talking about the diversity of Ukrainian-Canadian studies——if you are going to call it that. It is ethnography and history and geography and many fields. But one of the things going on now is the refugee experience. I would love to have a big study of the Ukrainian refugee experience. I think that what we know from the kind of work we do with Ukrainians, including Ukrainians in Canada, is that first-person interviews provide extremely rich source material. I was absolutely delighted when I was offered this job as a professor in Edmonton because it allowed me to do fieldwork, which I love.

With things like that we can impact other fields, global scholarship, Canadian society, and of course Ukrainian society. One of the points that came up a number of times is that we should work together, perhaps having a conference of all the centres. It is a wonderful idea, and I would very much endorse it.

Another thing I should point out is that we do work together already in many ways. I would like to thank my colleagues. I work on the Sanctuary Project, which is the documentation of sacral heritage, primarily in Saskatchewan and Alberta, and lo and behold, we have worked with Natalia [Khanenko-Friesen] and her students. I know that we also parallel work done by Roman Yereniuk in Manitoba.

That sort of co-operation between centres exists and should very definitely be taken further, not just with the Sanctuary Project but with other projects as well. I know that Roman mentioned archiving at the University of Manitoba. Yesterday many people talked about the digital world. Speaking of sharing, linking our various databases is kind of a natural process. I will tell you that from Sanctuary, we have a photo database of about 200,000 images—that is the part now functioning. It is not open, as I was telling Bishop David, for reasons of security: we do not want to let everybody and his uncle know where the hundred-year-old gorgeous tomes or gorgeous ievanheliia [1] are. To date, we also have about 150 hours of sound digitized, and that database should be open shortly. I know Natalia has letters that she has been collecting and processing. So there is great potential to link the kind of material we have to what Natalia has. And Roman has very interesting documentation of sacral heritage that they have done in Manitoba in the past and are also planning to do in the future.

Speaking of the Sanctuary Project, I must bring up the names of my two dear colleagues, without whom I could have never done this, John-Paul Himka and Frances Swyripa. I bring them up also for another reason, and that is to encourage, again, collaboration. It so happens that John-Paul, Frances, and I are very different people, with very different interests. And the fact that we are very different is exactly the reason for our success. Frances does archives: we could never survive without her. John-Paul is interested in iconography and photography, and I am the interviewer. If we did not do different things, we would not be able to do a project of this scope—to work together on doing different things in different areas.

The idea of working with other communities, not just the Ukrainian community, came up in various ways yesterday. I was doing interviews in Falher, which is in northern Alberta, and I was interviewing an elderly Ukrainian lady. She needed some help from her daughter, and the daughter was married to a very nice Frenchman who said something that I will never forget. He said, “You know, the Ukrainians did not exist in isolation.” We would never have survived had it not been for the French, the Danes, the Norwegians, and whatever other communities we interacted with. I was about to say, I know that in Manitoba the 125th anniversary was done in conjunction with First Nations. With the kind of work that we do, I would urge collaborative research. And as people have said, ethnic studies, immigrant studies, etcetera are also areas where we could work with other groups.

But you know, my desire has always been not just to work with other groups, not just to do community research. I am a folklorist—I want to work with the folk, with the regular people. Be it in the realm of technology or investigating diasporas or interacting with the home country, sharing knowledge, sharing data—I want us to do something so cool that it will get people from all sorts of ethnicities wanting to do Ukrainian studies. I teach 130 students, and believe me, they are not all Ukrainian but something interests them—a cool methodology, a cool approach—and they learn about Ukrainian studies. I also learn about their culture, we exchange information. My call on various levels is for co-operation and sharing.