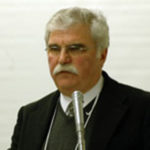 ROMAN YERENIUK is an associate professor of church history at St. Andrew’s College in Winnipeg and a sessional instructor in Eastern Christianity at the Centre for Ukrainian Canadian Studies and Dept. of Religion, University of Manitoba. He has also been a long-time administrator with both units of the university. Roman has written two volumes, published some 50 studies/articles, and has organized and participated in numerous conferences/symposia in Ukraine and Canada on the theme of the Ukrainian-Canadian diaspora. In addition, he has done extensive research and publishing on Ukrainian Orthodoxy, including the Ukrainian Orthodox Church in Canada, and is the editor of the journal Faith and Culture at St. Andrew’s College.

I want to begin my remarks by providing a bit of background to the Centre for Ukrainian Canadian Studies (CUCS) at the University of Manitoba to put into perspective the road it has travelled, especially in the last thirty-five years. At the same time I would like to reflect on some of the questions sent out to the panellists in advance and to complement some of the things that have been said, and perhaps add some new ideas to previous discussion.

The Centre for Ukrainian Canadian Studies is housed in St. Andrew’s College (SAC), and thus the college and the Centre share a common background. In 1946 in north-end Winnipeg, the Faculty of Theology for St. Andrew’s College was established, and in that early program there was a component known as Ukrainian studies. In fact, some of the scholars who came over in the émigré experience after World War II, such as Professor Dmytro Doroshenko, Professor Yurii Mulyk-Lutsyk, and Metropolitan Ilarion (Ivan Ohienko [Ohiienko]), taught those courses. […] In 1962 St. Andrew’s College moved to the campus of the University of Manitoba and built a remarkable building with tremendous support from the Ukrainian Orthodox community, [that opened for the 1964–65 academic year]. There was no arts or science component, just basically the theology program and Ukrainian studies, but without the university’s accreditation of the latter. The U of M meanwhile had an established Slavic studies program, including Ukrainian language and literature, for fifteen years. Thus Ukrainian studies were already part and parcel of the university setting. As a result, in the agreements between the university and SAC, the college was initially acknowledged only as an associate college, with the idea that within a decade it should move into fully affiliated college status, with an arts program of one kind or another. So how did the university move to establish formal arts and science courses, or specializations as such?

This process began in 1972, 1973, when the first two SAC courses in Ukrainian studies were accredited and St. Andrew’s College became an approved teaching centre of the university. Over eight years, some twenty-one courses were introduced and given from the departments of history, political studies, geography, religion, economics, fine art, and Ukrainian studies [with both Ukraine and Ukrainian-Canadian topic profiles].

Over the next decade, with a series of banquets and fundraising activities, CUCS raised significant dollars for its own university endowment to assist with the university budget line. This fundraising has continued to the present. According to the Centre’s mission statement, “The Centre (CUCS) exists to create, preserve, and communicate knowledge relating to the Ukrainian Canadians through teaching, research, and outreach.”

The CUCS courses provide for a program of studies as a major and minor in Ukrainian-Canadian Heritage Studies. Also, all university students can enrol in CUCS courses in the various departments and faculties of the U of M. In teaching, the Centre promotes 8 to 11 courses on an annual basis from its cohort of 21. The teaching staff of the CUCS have been university and SAC professors, on overload or as their teaching complement, as well as sessional instructors. In the last few years a number of post-doc and sessional full-time positions have been created, usually shared with Ukrainian Studies (Department of German and Slavic Studies).

CUCS has worked collaboratively with many university and community institutions, such as the departments of German and Slavic Studies, History and Religion, Archive of the Ukrainian-Canadian Experience, and St. Andrew’s College, as well as Oseredok Ukrainian Cultural and Educational Centre and UVAN.[11] The last conference took place on the theme of Ukrainians during World War II—“Contested Ground” in 2015. Together we have held nine successful symposiums or conferences with academics and community members. We have also partnered with CIUS and its Kule Ukrainian Canadian Studies Centre.

The Centre sponsors the biennial Michael and Iraida Tarnawecky Distinguished Lectureship, which brings a prominent Ukrainian-Canadian scholar to speak on an important research topic. This lectureship has been very popular with the general community.

Several members of the staff of the Centre have travelled to Ukraine on research projects and have worked with prominent diaspora centres. This includes lectures, conferencing, symposia, as well as program review work. The staff have worked with universities in Nizhyn, Kyiv (Kyiv-Mohyla Academy), Chernivtsi, Lviv (Ivan Franko National University and the Lviv Polytechnic National University), Lutsk, Chernihiv, Ivano-Frankivsk, and others.

The Centre has participated actively with the Learned Societies of Canada, especially CAS and CAUS[1], including its sessions on Ukrainian-Canadian studies. These meetings have become a sort of meeting place where we can compare notes with scholars working in the field.

The work of the Centre in outreach has been limited mostly to the province of Manitoba, including the city of Winnipeg. Community lectures, travel tours, presentations, book launches, and other events have been held in many towns and cities.

In Winnipeg we have worked collaboratively with Oseredok and UCC-Manitoba on themes of the Ukrainian Internment, the Holodomor, and the 125th anniversary of Ukrainian settlement in Canada. The Centre has also supported many local institutions, especially the Ukrainian bilingual school program. It has provided many media interviews, as well as newspaper, radio, and television commentary.

In discussing the needs and further work of Ukrainian-Canadian studies, I would like to make several points and observations. First of all, I would like to suggest that we need to improve sharing and communications between Ukrainian-Canadian programs across Canada. Maybe we could set up a formal or even informal council that would provide ideas, priorities, and direction, and become a clearing house for our field. We all have our corporate institutional individuality, but also we need a form of unity. This could also assist with some of the perceived duplication in our field.

Secondly, we need more intensive relationships with the general field of Canadian studies across Canada. Ukrainian-Canadian studies cannot be separated from Canadian studies but are an integral part of such studies. We also have some other subfields such as immigration studies, ethnic studies, and diaspora studies, in which we also should be involved. Thirdly, I would like to support some previous speakers in talking about strengthening our teaching role and especially in becoming more involved in online courses/studies and the use of technology in spreading knowledge in our field.

Fourthly, I believe we should be doing a better job of assisting students, especially with summer projects/jobs and government projects to do research in the field. In Manitoba, Dr. Stella Hryniuk and I have worked with a unique church architecture project in the province of Manitoba (very similar and parallel to the Sanctuary Project in Alberta). This past summer we employed four students who worked throughout Manitoba and completed basic archival work on thirty churches. There are many other such projects that could be undertaken, such as oral history, family documentation, material culture, etcetera. For some this could lead to jobs, maybe even careers, in archives and museology.

Lastly, I would like to go on record and support Andrij Makuch, who spoke on the need to improve our work in urban history. This sub-area needs our respect, since rural history already has its champions. In addition, I would like to advocate for more work on the religious history of Ukrainians in Canada. This field is slowly declining and also needs its specialists.