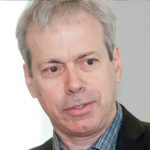 DOMINIQUE AREL is an associate professor of political science and holder of the Chair of Ukrainian Studies at the University of Ottawa. He received his BA from the University of Montreal, MA from McGill University, and PhD from the University of Illinois at Urbana-Champaign. Dr. Arel co-edited Rebounding Identities: The Politics of Identity in Russia and Ukraine (2006). He has organized the Annual Danyliw Research Seminar on Contemporary Ukraine since 2005. Professor Arel manages the Ukraine List (UKL), an internet academic/current events newsletter that reaches over 1,500 subscribers in thirty-five countries.

As Chair of Ukrainian Studies at the University of Ottawa, I am partaking this weekend almost with a sense of filial duty in the celebrations of the CIUS 40th anniversary. In my younger years, I had a saintly great-uncle who was a Trappist monk, and I even got to spend a summer working in the archives of their monastery on the hundredth anniversary of their foundation. I learned that the monks referred to an older monastery in France as the “Mother House,” where the original monks came from. My chair may be far away from theology—our friends from the Sheptytsky Institute, who alas have just left Ottawa, are covering that very well—yet I cannot but think of CIUS as our Mother House. Over the years, besides respect and co-operation, CIUS has quietly taken very concrete steps to help ensure the durability of the chair.

In my presentation on teaching Ukrainian studies, I will be making three points. The first is about approaching Ukraine through the study of problems. The second is on graduate training. The third is on providing doctoral, post-doctoral, and young scholars with a research forum. Unlike other Ukrainian studies chairs and institutes in Canada, the chair at the University of Ottawa focuses on social science. I belong to a subfield of political science called comparative politics, which could be defined as the study of domestic politics understood in a comparative context. What this means, in a nutshell, is that if, for example, I want to study language politics in Ukraine, I have to find out how the case of Ukraine contributes to the study of language politics more generally. And how the insights of the larger literature on language and politics help us understand the case of Ukraine. This is literally how I entered the field. My interest in language politics during perestroika almost instinctively led me to Ukraine and, with the help of the late Bohdan Bociurkiw and of Alex Motyl at Columbia, I ended up in a summer school run by a young man who would, much later, become ambassador to Canada—Ihor Ostash.

This is how Ukraine is incorporated in my teaching, as students are attracted to Ukraine through their keen interest in contemporary issues. When I teach on political systems, the model of competitive authoritarianism developed by Lucan Way is on the syllabus, with Ukraine being one of the “swing cases” (to use an American electoral analogy). When I teach on political violence, the Holodo­mor is the crucial case of a modern famine used as a means of mass killing. And the war in the Donbas has now made Ukraine a critical case in a very different type of political violence. When I teach on political memory in a larger course on identity politics, then the Holodomor, World War II, and now decommunization bring forward a literature very interesting to a comparative audience. When we explore social mobilization, the Joshua Tucker article of 2004 is a classic, raising students’ interest in the colour revolutions, the so-called “springs,” and now the Maidan. My students know that I am passionate about Ukraine, and they come to understand why Ukraine matters academically, not necessarily because of its sudden geopolitical importance.

My second point is on graduate training. I have five graduate students working on Ukraine, four of them at the doctoral level, and with a new round of applications for the Kule Doctoral Scholarship, perhaps one or two more in the pipeline. With a half-dozen more students or young faculty members working on post-Soviet or Eastern European topics, we periodically hold informal seminars to let them present their work. This is the upside of having a critical mass of students firmly or loosely affiliated with the chair, allowing us to build an actual community. Years ago, moreover, I decided to extend the model and make the chair part of a broader community. At the initiative of French colleagues, the chair became involved in the organization of an annual Social Science Summer School in Ukraine for doctoral students.

An intensive one-week event, the school is structured not around lectures but around the presentation of doctoral projects at various stages of completion, from preliminary to advanced field or archival work. We have a dozen faculty members and twenty students sitting around a large table, and students get to have their project discussed for a full hour, plus all kinds of informal feedback throughout the week. Significantly, the school is not on Ukraine but in Ukraine. The common geographical area of cases is East Central Europe, broadly defined, with 35–40 percent of students working on a Ukraine topic. And each day features an element of what we call “academic tourism,” when we discover aspects of the surroundings that could be meaningful to our broad interests. In Kharkiv last summer, this meant visiting the OSCE monitoring mission office, the “Stantsiia Kharkiv” NGO, which cares for internal refugees, and a Holocaust site (Drobitskyi Yar) and museum, and holding a round table with local and foreign correspondents (brought in from Kyiv) who have covered the Maidan and the war [in the Donbas]. The school is held in a different city every year, namely (in inverse chronological order): Chernivtsi, Lviv, Mykolaiv, Zhytomyr, Ostroh, Dnipropetrovsk, and Uman. Strong bonds are created, and in the last five years I have ended up on the doctoral defense committees of five students whom I had met at one of these schools.

My third and final point is on a research forum. Since 2005 the chair has been holding an annual research forum on Ukraine funded by the Danyliw Foundation in Toronto—the Danyliw Seminar. The idea was to provide scholars in the field, and particularly the rising generation, with a platform to present their research—not in a panel format like this one here, but in a seminar format where they present separately and get the full attention of their peers and older colleagues in an intense discussion. (Because of the extraordinary events in Ukraine, we had to alter the format in the past two years, but we are getting back to it this year, while keeping a large section on special events.) Essentially, the summer school adopted the Danyliw format and brought it to Ukraine, with the difference that Danyliw is about presenting research findings, not early doctoral projects.

Counting the next one on 10-12 November [2016], the twelve years of the Danyliw Seminar provide us with a fairly representative sample of the changing field of Ukrainian studies—excluding language and literature, since we are a social science chair. Our sample is 148 presentations by different academics (several have made repeat visits, but they are counted only once, and discussants are not included). Thirty-three non-academics, such as the two filmmakers who will present their film next month, are also excluded from the exercise. Of all 148 presenters, 40 percent were doctoral students at the time of their presentation. This unique database allows me to make four points.

First, in reference to Mark Von Hagen’s comment yesterday about how political scientists have “abandoned us,” fifty of the Danyliw presenters are political scientists, or one-third of the total. Three of them engage in the kind of modeling or advanced statistical techniques that Mark alluded to, and they all know Ukraine very well. Political scientists are in fact a very important component of the area studies discipline that we call Ukrainian studies.

The third point is that from our vantage point as social scientists, the boundary between social science and history is becoming very porous. When I began the seminar in 2005, my general take was that we would leave history to our esteemed colleagues in Edmonton and Toronto, and focus solely on social science. This did not last long. Forty of our presenters have been historians, and just this year we are doing three panels on new books: by Serhii Plokhii (The Gates of Europe); by a French historian, Catherine Gousseff, on the Ukrainian-Polish deportations after the war; and by a historian of law, Lawrence Douglas, on the Demjanjuk trials. Our starting point is the relevance of research topics for an understanding of contemporary Ukraine, and we are inexorably and increasingly drawn to historical research. This may be self-evident to historians, but it is real and the upshot is that young social science and history scholars are engaging each other.

The fourth and final point is the Ukrainian makeup in the field. Of our sample of presenters, 53 percent are non-Ukrainian, a slight majority. Of the 69 presenters with Ukrainian background, 17 are from the diaspora (born or raised abroad), 25 are from Ukraine, and 27 are Ukraine-born but studying or teaching abroad. In other words, three-quarters of the nearly 50 percent of young scholars in the field are from Ukraine, revealing that the field has been revitalized from two ends: non-Ukrainians choosing Ukraine as a great field to study problems of global relevance, and Ukrainians (in a territorial, not necessarily ethnic sense here) who are increasingly part of a transatlantic community of scholars. A near 50-50 breakdown is a natural equilibrium for an area study when the political regime in the homeland allows for an open academic exchange. This shows how vibrant the field has become