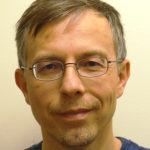 TARAS KOZNARSKY is an associate professor in the Department of Slavic Languages and Literatures at the University of Toronto. He holds a PhD from Harvard University (2001) and an MA from the University of Alberta (1994). His most recent work includes the articles “Heroes and villains in the historical imagination: The elusive Khmelnytsky,” “Jews in Russian travel narratives of the early nineteenth century,” and “The case of Beilis and novelistic imaginations.”

Initially, as a second Ukrainianist in a small Slavic department, you have to do what you have to do. Teaching a number of “straight” Ukrainian courses, you have to develop second- and third-year Ukrainian language survey courses, and so on. But the problem of two Ukrainianists is that it is a small field, and having two people competing for the same pool of students is obviously not very healthy or helpful. This has led me to carve out a field for myself, and in this case my perspective will be personal. I had to design courses between and outside the lines of disciplines and various Slavic and other cultures. This task was somewhat easier for me because I studied Czech, Russian, and Ukrainian in my undergraduate years at Lviv University, and then in my graduate years at Harvard I could read Polish, which was helpful as well. But the main challenge was, and remains, to design a package and contextualize interdisciplinary courses around a certain compelling or inevitable idea, theme, or place, with the hope that they would be attractive to students. Since all the courses are taught and read in English, they are very much dependent on the availability of good texts in (preferably) good translations.

Even course titles affect their attractiveness. For example, the cultural history of Kyiv is certainly deserving of a place in any cultural curriculum, but a course title such as “After Kyiv” appears to imply ethnic limitations. As a packaging device, the title has been changed to “City of Saints and Sinners”—actually, it fits Kyiv quite well. A survey of the chief modernist and avant-garde movements in the late Russian Empire and early Soviet years was originally titled “After Filonov’s Universal Flowering ” (the “Faking It” course). At the insistence of the Faculty of Arts and Sciences, it now appears on student transcripts as “Forgery and Culture.”

Other courses I have developed and taught include an overview of Slavic book culture, “Saints Cyril and Methodius to Hrabal”; an overview of Gogol, “The Ukrainian Father of Russian Prose” (of sorts); and an introductory survey of Ukrainian and Russian civilization, roughly from Herodotus to Mazepa and Peter I. Fortunately these courses qualify for several programs—for most minors and majors in our department—making them meaningful and useful to my department. In addition to creating this niche, all of them allowed—indeed, forced—me to resituate Ukrainian content within broader cultural and disciplinary frameworks.

It is certainly easier to teach a survey of Russian literature or the Russian novel or Russian short story, with textbooks, anthologies, and all kinds of resources at your disposal. It would perhaps be easier to teach a survey of the Ukrainian novel or Ukrainian short story, but times have changed. It is a matter of administrative pressure and educational marketing, cultural branding, and recognition of such brands. The Russian novel and Russian short story, literature of the Russian golden age, Dostoevsky, Tolstoy, and so on, are brands that attract students and guarantee enrolment. For example, we are likely to find Ukrainian students and Canadian students of Ukrainian descent in a survey of the Russian rather than the Ukrainian novel. The same is true for other national cultures as well: Polish drama, Czech short story, and so on. So the traditional national adjective is not sufficient to attract an audience. Are there Ukrainian novels on a par with Tolstoy and Dostoevsky? Ukrainian stories to die for? Ukrainian drama to salivate about? Well, Ukrainian literature has marvellous texts, for sure. We all can point to such examples as Krymsky, Pidmohylny, and Domontovych for novels, Stefanyk and Kotsiubynsky for stories, and Ukrainka and Kulish for drama. Certainly contemporary Ukrainian literature is on a par with anything good in any literature. But again, the only recognizable brand remains Russian. For good or bad reasons, one can imagine students reading hundreds of pages of War and Peace or Anna Karenina—they do it. By virtue of the share of the cultural market that the Russian cultural legacy occupies in the West, accumulated over the past 150 years, it is what it is. The second problem is that of translations.

The third problem is text selection and texts and reading. What was said yesterday about present-day reading habits is true. Today’s students, on average, have a two-page attention span, unless there is some magic. Reading and literacy in the post-Gutenberg world—that is, Bill Gates and Steve Jobs’s “Revolution Age”—are neither intensive nor extensive. They amount to the reading of captions. It is pixelated and pulverized reading: we have to deal with that and overcome it somehow. How to sustain reading and teaching—reading practices in this environment—is a major task all teachers of literature face.

Let us return to our Ukrainian packages, our material. In all the courses that I teach it is, after all, my vocation to feature Ukrainian content and frame it in a way that makes it both distinctive and attractive. A student taking the Gogol course, with five out of twelve weeks focusing on Ukrainian themes, will see the writer as an example of cultural hybridity, blackface performance, as well as a product and victim of his forked tongue. It is a little revenge, perhaps, for decades of scholarship that was ignorant or neglectful of the Ukrainian Gogol. In packaging and framing the Ukrainian content, it is usually best to zoom in on this content or open it up. That is not always easy. Building thematic courses from scratch is like doing bathroom renovation on your own. You have no idea until the end is in sight whether the framing works and the lighting and accents of your choice match your vanity. [Laughter.]

Opening up Ukrainian material, using the example of Kyiv, it is most productive to emphasize the dynamics of change, interaction, and competition in the formation of the real and virtual imagined city: grand, devastated, peripheral, metropolitan, revolutionary. “The capital of contemporary Ukraine emerges through the competition of narratives, legacies, and voices.” In this context, it is possible and actually effective to teach Bulgakov’s White Guard, framed with Kuprin’s Yama (The Pit), Sholem Aleichem’s Adventures of Menachem-Mendl, and Pidmohylny’s Misto (The City). The latter two works do not suffer in comparison, and neither does Kyiv as the capital of Ukraine. By the way, Pidmohylny is available in enough English excerpts to be taught. Future possibilities might include urban experiences, literary colonizations of city-spaces in Ukraine. Bruno Schults, Bohumil Hrabal, and Yuri Vynnychuk can be put together.

Now, zooming outward into more generic thematic courses, sometimes they are most satisfactory when a Ukrainian piece provides the dessert, a concluding touch to the whole enterprise of a course. Everything suddenly comes into focus, Technicolor™ and all. These are my personal favourites. When one takes Domontovych’s Bez gruntu [1] at the conclusion of a survey of modernism and the avant-garde, it is amazingly effective. And, of course, I provide a commentary on traditional modernist and avant-garde aesthetics, and much more—the Ukrainianness of this text has a most brilliant and poignant universality. Or, taking Valerii Shevchuk’s Eye of the Abyss at the end of a course on forgery—when the nature of miracles manufacturing the faith and infinite recycling of stories as they bleed into life, and vice versa, are revealed in the midst of sixteenth-century Ukraine (Ruthenia), town by town, by social duress, moral depravity, and outside forces—the topic becomes historical and yet atemporal, universal.

Then, of course, packaging. Maybe the time will come for a mega-course, “The Ukrainian Novel.” Who knows who will follow Yuri Andrukhovych and Serhiy Zhadan? In any case, contemporary Ukrainian literature can be successfully thematized and taught with what is available today, and I do hope to build a course on a single Ukrainian novel opened up to a broad intercultural, interdisciplinary context, namely, Bez gruntu by Domontovych, with the overarching thematic title of “Roots and Rootlessness.” This is no War and Peace, but of course in some ways it is more than War and Peace and Anna Karenina put together, and Natasha’s Dance,[2] and so on. The richness of this unique novel allows one to engage in a tremendous range of texts, legacies, and ideas. It has it all: commentary on a range of artistic movements, historiosophical meditation, sexual drive and indeterminacy, music, politics, infinite depths of history, infinite draws and fragmentation of culture. The main problem is the inadequacy of the translation. It exists but must be redone. Even this inadequate translation does the trick, though.

So perhaps it would be useful for the small pool of us teachers of Ukrainian literature to create a forum—I would certainly be happy to have some virtual space for sharing educational ideas, tricks, texts, experiences, trying to inspire one another. We have some venues already, and I especially want to point to my colleague Maxim Tarnawsky’s page, “Ukrainian Literature,” on the U of T Slavic Department’s website, which has a remarkable number of sources in both Ukrainian and English. We probably need more.

The future of the Ukrainian curriculum in traditional departments will certainly be a combination of something more familiar— courses, surveys in restructured and repackaged formats, and thematic courses in which Ukraine is a main dish or a dessert. In today’s environment, which gravitates toward the relentless corporatization of learning, we still have to emphasize that culture and literature should remain and be expanded as venues for discussions of society and the human condition in general. And the field is certainly worthy of life’s efforts. Here I would second our presenters Mark Von Hagen, Yaroslav Hrytsak, and Rory Finnin: Ukrainian culture and literature are capable of providing access and insight into the most relevant, complex, and powerful human experiences, and we should display them with the best, without apologies or reservations.