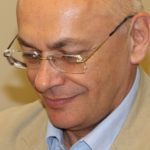 VOLODYMYR KRAVCHENKO is a professor in the Department of History and Classics and director of the Canadian Institute of Ukrainian Studies, University of Alberta (since 2012). His recent works include: “Ukraine: History confronts geography,” in The EU’s Eastern Neighbourhood: Migration, Borders and Regional Stability (2016); “Ukrainian historical writing in North America during the Cold War,” in East and Central European History Writing in Exile 1939–1989 (2015); “Ukraine faces its Soviet past: History vs. policy vs. memory,” in Mass Dictatorship and Memory as Ever-Present Past (2014); and the monograph Ukraïna, imperiia, Rosiia: Vybrani statti z modernoï istoriï ta istoriohrafiï (Ukraine, Empire, Russia: Selected Articles from Modern History and Historiography; 2011).

Your Grace Bishop Borys, Your Excellency Ambassador Shevchenko, President of the Ukrainian Canadian Congress Pavlo Grod, colleagues, friends: our conference is over. I am standing between you and the banquet, with just some observations and feelings I managed to collect and summarize while attending the debates.

First of all, it was really exciting. Our conference was enriched by more than six hundred visitors from all over the world, including those who attended in person here at the University of Alberta. I am really impressed with the intellectual level and openness of the debates. I believe most of us now better understand where we are with Ukrainian and Ukrainian-Canadian studies. I believe we better understand their context as well. That is why the conference title is “Texts and Contexts of Ukrainian Studies in Canada.” That is what really matters. My impression is that, despite all odds, optimists prevailed over pessimists. .

There were some interesting topics I would like to touch upon. For one thing, the balance between Ukrainian and Ukrainian-Canadian topics, our two main pillars. I do believe it is possible to develop both of them to mutual advantage—to bridge them. Just consider such topics as work ethic, social values, political culture, cross-cultural communications, urban studies, ethnic and nationalism studies, regional and border studies, diaspora, refugees, and so on and so forth. Forty years ago, Ukrainian studies revolved around a non-existent state and a nation with dubious credentials. The irony is that today, when the Ukrainian political nation is a reality and the Ukrainian state exists, I would say that Ukrainian studies are becoming important precisely because they are about a specific nation—a border nation located in the geographic centre of Europe, with complex geographies and identities. Dominique Arel sounded optimistic, and I am also optimistic about the possibility of interdisciplinary dialogue. It is interesting that political scientists are moving toward history, while historians are becoming contemporary studies specialists and experts in Canadian and non-Canadian aspects.

Basically Ukraine is a teenaged country, with all the complexes and complexities characteristic of that age. If our partners in Ukraine are ready to be treated as adults, let us establish a new mechanism of dealing with them. Let us treat them as real partners, not just recipients of some sort of humanitarian aid. Let us support Ukraine-based projects on the basis of open competition. We have received about 250 applications from Ukraine this year alone, which is a good sign. It shows that the Ukrainian academic community is active and gaining maturity.

This conference was conducted on Canadian soil. Thus, all our findings and debates also contribute to Canadian scholarship; they will be published in Canada and become part of the Canadian humanities and social sciences. Dear colleagues, we are all involved in one way or another. I wish there were no issues with identity, no memory issues, and so on. However, Ukraine is still a work in progress. Canada is also a work in progress. Thus, identity matters. It is important for those who are discovering their Ukrainianness to understand their identity, to understand where they are and what is going on. We cannot predict the results and cannot impose our agenda on the course of events. […] What we can do is keep our minds open, maintain academic integrity, abide by our professional norms and values, and be honest and tolerant with each other. One doesn’t need to have a Canadian passport to do this. That is where I stand.

By the way, I was intrigued by Mark Von Hagen’s observation about the applicability of a model of a military democracy to Ukraine. And Rory Finnin is right to draw our attention to the ethical consequences of our activities. On another matter, in the course of the last two years thousands of texts about Ukraine have been published in different languages. So we can no longer complain that Ukraine is not visible in information space. However, when it comes to the issue of professional competence, sometimes I am really shocked to see respectable professors turning into propagandists and warriors. It seems to me that the world of academia should behave with greater decorum.

This is not to say that we should discourage those who become interested in Ukrainian topics. Let us not forget the non-Ukrainians who have been and are deeply involved in Ukrainian studies. To mention just a few: Canadians George Simpson, Watson Kirkconnell, and our colleagues David Marples, Heather Coleman, and Dominique Arel; and Americans Clarence Manning, Philip Mosely, William Chamberlin, and John Armstrong; and elsewhere, our colleagues Mark Von Hagen, Hiroaki Kuromiya, and many others. Of course, they do not need to be patriotic Ukrainians—they just need to be professionals. We should be happy to have all of them in Ukrainian studies.

In terms of our priorities, let me presume that you have read my introduction to the commemorative issue. If not, please do, since I expressed some ideas there about the future development of the Institute, my vision of Ukrainian studies, and our priorities as well. Let me tell you that I am really attracted to the think-tank model, and, I am sorry to say, I do not believe that any new institute of Ukrainian studies is possible in Canada in the nearest future. If you are really interested in the future of Ukrainian studies, let us build up new endowments, establish endowed chairs at the universities, and consolidate our resources, financial as well as intellectual.

Thirty-five years ago, after the Institute was established by the provincial government of Alberta, our founders decided to integrate CIUS into the University of Alberta. Our budget also became part of the university budget. I think it was the right decision. The Institute can function properly only if it is part of the academic environment and the academic world. We are a part of the University of Alberta. Having said that, I would like to stress that it was our community support that helped us survive and maintain our academic identity in research activities and priorities. Let me tell you that no endowment, no amount of money invested in the Institute, no matter how small, has been used for purposes other than Ukrainian and Ukrainian-Canadian studies. All of the Ukrainian endowments in the Institute are safe. However, I do admit that we have problems in using some of our endowments with their very specific terms of reference. We have too many restrictions to be able to operate according to our changing priorities. That is why we are well-to-do on the one hand but short of money on the other. That is a paradox, but all that is Ukrainian is always full of paradoxes, is it not? That is why two of our three main units, the Peter and Doris Kule Ukrainian Canadian Studies Centre and ULEC, the Ukrainian Language Education Centre, are underfunded. We cannot even afford to hire a full-time coordinator for each of those two units.

As for collaboration, I am ready to collaborate with any organization in Canada and worldwide on the basis of academic autonomy. If you need our knowledge, our expertise, our experience, please say so: we are ready to help. That is why I decided that the Institute should be represented at the Ukrainian Canadian Congress in Regina. That is why we initiated this resolution about creating an advisory board, and I personally would be happy to join the committee at the UCC.

Has CIUS fulfilled its mission to become the main coordinating centre of Ukrainian and Ukrainian-Canadian studies in Canada? That is a rhetorical question, but I would ask you all: how many centres of Ukrainian and Ukrainian-Canadian studies do we really need to avoid the impression that Ukrainian studies are overrepresented? As for the community, of course I wish it were better informed about our activities. Let me say, then, that within the last three or four years we have created a contemporary Ukrainian studies program. Two young Stasiuk Fellows, specialists in contemporary topics, joined our Institute, and two distinguished specialists, Taras Kuzio and Bohdan Harasymiw, joined as well. In the course of a year or so, they both gave hundreds of interviews to the world press in different languages, to say nothing of special publications. So do not try to persuade me that CIUS doesn’t pay attention to contemporary Ukraine. Above all, the mandate of CIUS is to produce expert knowledge published in professional journals. That is where we stand, and that is our identity.

We completely reorganized our website, which gained 2,000 followers in just a year and a half. The fact that our conference was live-streamed to Australia, Ukraine, the United States, and Europe shows that we are increasing our visibility and influence as we provide reliable information and produce and distribute expert knowledge about Canada and Ukraine.

A couple of words about Ukrainian studies at the University of Alberta. For now, we have two centres: the Canadian Institute of Ukrainian Studies and the Kule Folklore Centre. We have two chairs in Ukrainian studies, and we have the largest cluster of endowments in the University of Alberta. So I would say that rumours about the death of Ukrainian studies at the University of Alberta are a bit exaggerated. Last but not least, we are going to transcribe and publish the proceedings of this conference. Our coordinator,
Susanna Lynn, will contact you soon with certain requests and instructions. Please stay in touch and feel free to submit your texts in writing anytime, the sooner the better. Once again, let me express my deep gratitude to all our participants for their hard work, to our sponsors—especially to the —to our team and our volunteers. Thank you very much.